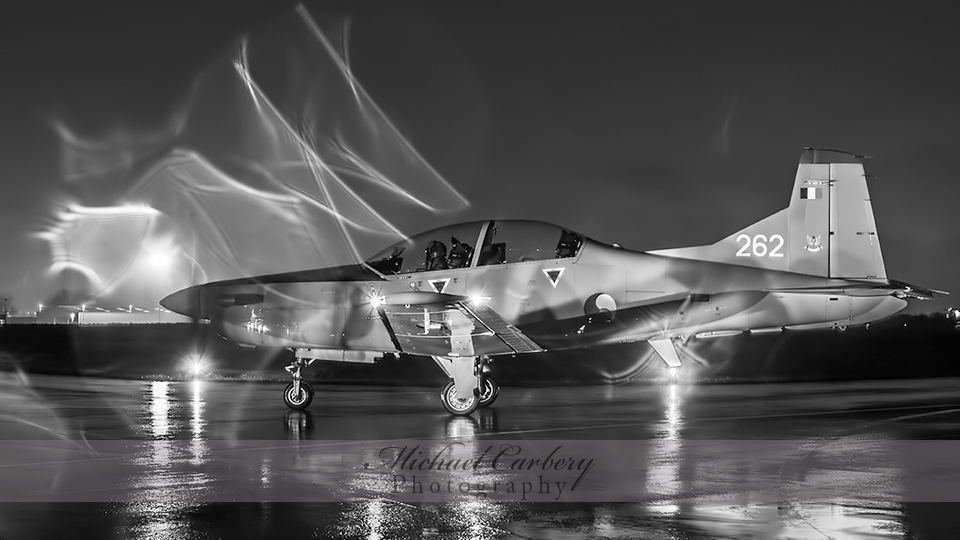 I was lucky enough recently to be invited by the Irish Air Corps to their latest night shoot. I believe this is only the second one they’ve held. It was to be on a Wednesday evening and I had to be there by 7:45pm at the latest.

As is always the case it was a rush – left home at 5:30pm but wasn’t actually getting out of Lurgan until 5:45pm, the usual being held up by railway gates and traffic lights.

Anyway even without breaking any speed limits we (my son was with me) managed to arrive at the base just after 7:30pm and was greeted by Sergeant Hayles and shown in to the Mess. There was probably 30 or 40 other like minded enthusiasts, some I knew others I didn’t.

At around 8pm after a safety briefing we were brought by bus out on to the runway. This was totally different to last years set up. Then the aircraft were parked up on the apron, their engines started and we were able to  move back and forth amongst them, always with a great deal of distance and always under the watchful eyes of Air Corps personnel.

This year the Air Corps wanted to try something different – they were going to taxi the aircraft out to us on the runway. Unfortunately for us there was a strong wind and driving rain. The aircraft were brought out to us one at a time, stayed a few minutes and then moved on for the next one to arrive. We made the best of it as we could. The wind and rain was really bad and the wind chill factor meant I couldn’t feel my fingers. Not a very pleasant sensation 🙁 After about 90 minutes we had the opportunity to head down to the ramp to take more photos but the cold had got to us and we bailed out and headed home. A 2 hour drive in very wet clothes isn’t a nice feeling.

Despite the weather it was a fantastic evening and many, many thanks to the Irish Air Corps for their hospitality.